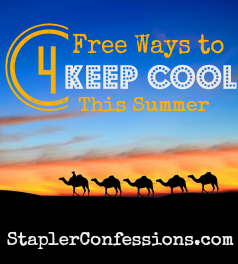 I lived in a desert when I was in the Peace Corps. A legitimate desert. With camels. A landscape in every shade of dust — as far as the eye could see. There were times during the summer when I would walk out of the house and see the air shimmer with the mid-day heat.

But it was a dry heat.


There wasn’t much of the latest technology in this desert. For a party, my host family would sometimes borrow a neighbor’s VCR so we could watch their sole video, Titanic

. Dubbed. Even if it could be afforded, the house’s electrical system wouldn’t be able to run an air conditioner.

Yet, with all the latest technology available to me here in the States, I was much more uncomfortable in the heat last summer than I ever was when I lived in the desert. I work in a newly-renovated building with a new HVAC system and beautiful windows overlooking the city, and lived in a townhouse with central air conditioning. So, why was I so uncomfortable? (aside from being 5 degrees warmer due to being pregnant)

How did we stay cool without dropping a dime?

I realize that it’s not very helpful for me to suggest that you build your home out of clay bricks you created from your own soil. But, it was free and it worked. I remember walking into a wood house during that summer and feeling the heat inside was much worse than the heat outside.

2. We kept the shades closed.

It would always be a bit of a shock to the system to walk inside, from the bright burning morning, and be plunged into darkness inside. Your eyes would have to adjust a little. Here in the States, we can afford light bulbs — so keeping the shades closed doesn’t mean that we have to be in the dark. But keeping those shades closed does mean that the sun isn’t unnecessarily heating the house. The same insulating shades that are so useful in the winter work really well in the summer.

3. We kept the windows and doors closed.

Something I always dreaded last summer was walking into the building at work and seeing that someone had already opened the windows. The building was cool overnight, and someone who hates air conditioning thought it would be brilliant to let in the “fresh” air. Or, more acurately, the air that was stagnant from heat and humidity. Here’s a good rule of thumb: If it’s hot outside, don’t let that heat inside. It’s likely that the fleeting breeze you feel from the window is actually replacing your cooler inside air with hot outside air.

Go ahead an open up the windows at night, when it cools down outside. But shut them up tight when the sun rises, so you can trap your cool air inside.

At night, the family picked up their bedrolls and stretched them out on the deck, where we all snored away under the stars. Aside from being a quaintly communal stargazing experience, it was the best way to harness the naturally cool air that would descend upon us as soon as the sun went down. This obviously doesn’t work in humid areas, because the heat doesn’t leave with the sun, but if you’re in a more arid climate, it’s wonderful to wake up smelling the cool morning air as it burns off for the day and go back inside, where it’s still cool from the night before.

There you have it: Four free ways to keep cool this summer.

Are you ready to give it a try? Aside from living in a mud hut, of course!

image from photokanok via freedigitalphotos.net

5 thoughts on “4 Free Ways to Keep Cool This Summer”