Let’s start with the good news:

We got $500 back into our Emergency Fund! It feels so good to have a safety net again, even if it is really tiny. It’s still something.

I set up a new retirement account. My new job matches up to 3% of my retirement contributions, so I set up a 3% contribution. 6% per year is not a boatload of cash, but it’s better than nothing — and 3% of it is free money. That’s hard to pass up.

You may have noticed that there is some new advertising on the blog. It’s all randomly generated — I have no control over what ads appear after my posts and what appears on the sidebar. I hope it’ll generate more revenue than what I earned on my affiliate links (which was $0). I expect about $5 a month from these ads, but it’s better than nothing.

We didn’t do the envelope system again this month, and put our spending back on plastic. We don’t have disastrous results, but we have spent more than we would like. We had some housing expenses. The hot and humid weather really wore on our sanity, so we caved and bought two air conditioners. To the tune of $500 total. We also moved Little Stapler into a high-back booster seat because his little brother grew out of his infant carseat and we switched him into Little Stapler’s convertible carseat. To the tune of $110 total. 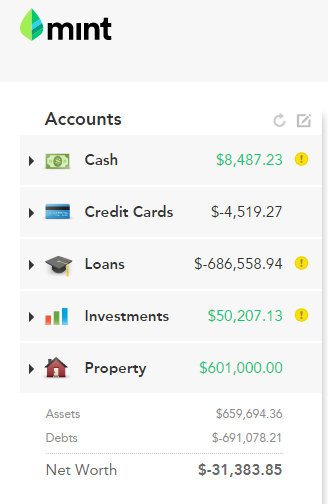 Cash: $6,789. This nice, positive, uptick is partially because of our reinvigorated Emergency Fund. Woo hoo! It’s also the end of the month, which means we’re building up our cash for our first-of-the-month payments like the mortgage and monthly daycare bills.

Credit Cards:   – $2,550. Definitely a reflection of the fact that our Envelope System only lasted us 3 weeks! I should follow up with my lessons learned, one of which was: once the grocery cash ran out, we still needed groceries; and once we started using the credit card again, we continued to spend money. We didn’t go out an purchase anything extravagant, but there were some home improvement and baby gear purchases that we paid for with plastic.

Loans: -$1,526. Although we keep plugging away with our regular repayments, Mr. Stapler’s federal loan no longer qualifies for income-based repayment, so they switched him to a 10-year repayment schedule. That means $850 in monthly payments! We’re not particularly motivated to slay his loan because it has a competitive fixed interest rate (4%) and the flexible repayment of a federal loan. To get on a 25-year repayment plan, we needed to put the loan on forbearance while the servicer takes it out of income-based repayment. As a result, Mr. Stapler’s student loans aren’t dropping as much as they were before. We should be back on regular repayments of $450 a month by November.

Investments:  – $1,771. You probably know that the stock market took a big dip this month.

Did you achieve your financial goals this month? Did you have any particular challenges?