If you can’t get past seeing Costco’s annual fee of $60 to $120 as cannibalizing the savings, you might want to try one of the following six tactics for shopping at the warehouse chain without a membership of your own. 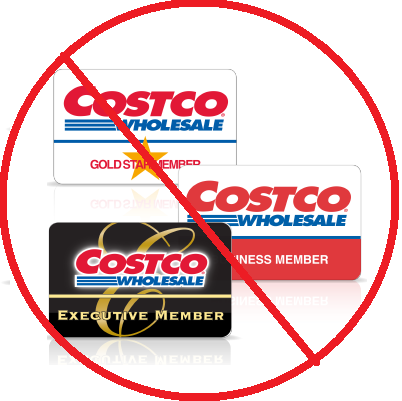 This is the one option that never gets old. You do not need a membership to see the eye doctor within the optical section of Costco, nor do you need one to buy any prescription eyewear there.

Although this isn’t really shopping in the most literal sense, it’s still a way to take advantage of Costco‘s low prices without buying a membership.

Presumably the price point there makes it too much of a nuisance for the cashiers to ask to see your membership card before you go in — but to get in the door to Costo, you might have to tell a white lie and say you’re on your way to the optical section.

Surely you know at least one person who already has a Costco membership and doesn’t mind going to the store with you. Offer to do the driving and you should be able to sustain that dynamic indefinitely. The more you have in common with this friend, the better this dynamic will work out, since you have to be able to shop exactly when they want to go.

If you can find more than one friend with a Costco membership, then you might feel less constrained. But no matter how many Costco-going friends you’re able to find, assume it’s up to you to check in with them about when they’re going to the store. If you expect an invitation every time they want to shop, you might become resentful when it doesn’t happen.

Branded as the Costco Cash Card and available in denominations ranging from $25 to $1,000, this card lets you shop at any Costco store. You may also redeem it at Costco gas stations; they often have much lower prices on the same top-quality gas.

If this sounds too good to be true, well, here comes the catch: Only members are allowed to purchase Costco gift cards. Non-members either have to rely on a friend with a membership or buy the card at a markup via a secondary eBay or Craigslist.

If you have a car, it might make sense to get a higher denomination card for gas and then do everything in your power not to lose it. Remember the word “cash” on the card? That means it’s not replaceable, according to Costco policy.

Some people like to minimize risk by getting smaller denomination cards; but when you have more than one of them it’s easy to confuse which ones still have money left on them.

This one is like that expression “borrowing from Peter to pay Paul,” only in this case, you’re foregoing the Costco fee and instead paying a TaskRabbit deliveryperson an hourly rate to shop for you.
Of course, you need to specify in your request for a taskperson that he or she have their own Costco membership in order to take on your assignment, or the whole thing is a wash.
And even when you find a tasker (as they’re called) who has a Costco membership, maybe what you end up paying for them to shop there and deliver to you might not be as much as you would have spent on your own membership, but if you order this a second time, you’ll defintely have completed “borrowing from Peter to pay Paul” at Costco.

You don’t need a Costco membership to get an Instacart employee to shop there for you. You do need to purchase at least $35 worth of Costco groceries to get free delivery — but that should be an easy feat, given all the bulk sizes at Costco.
Alas, Instacart is only free for the first two weeks, and then it costs about $30 more per year than even an executive membership.
You might want that Instacart subscription if you’re interested in having purchases delivered to you from any of a dozen different grocery and retail stores that also participate in the service. Once you have that many choices for home delivery, you might not even want to shop at Costco every time you log on to Instacard.

Word to the wise: You might not make a lot of friends in the checkout line at Costco by telling everyone that you are shopping without a membership.

Actually, you might find that some of the tactics for shopping at Costco without paying for a membership may wear out their charms with overuse. They might feel inconvenient or downright tacky if continued indefinitely.

The more frequently you shop at Costco, the less the membership fees will seem like they eat into the cost savings you realize at the store. Once you become a regular shopper there, it becomes more convenient to purchase your own membership so you don’t have to rely on all of the tactics mentioned here.

See if Costco is open on Easter here.