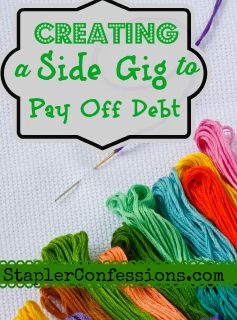 Mr. Stapler is a hustler.

A side hustler, that is.

If you’re not familiar with the term side hustle, and you’re struggling with debt, you should learn all about it. It’s a new term for an old concept, one known by many names: A side gig, a second job, moonlighting, freelancing, etc. A side hustle is a way to earn money when you’re not earning money with your usual job.

Why should people in debt learn all about side hustles? The key to paying off debt is not just to Spend Less, but to Earn More. It’s a simple, inescapable, equation.

Google “side hustle,” and you’ll find lists of all sorts of ways to earn money in your spare time. From walking dogs to delivering pizzas, freelance writing to developing apps, and other side hustles you’ve probably never heard of. Once you’re in side hustle mode, you see money-making opportunities everywhere.

Mr. Stapler didn’t intend to start a side hustle — it just happened. It all started with a boring job that had a lot of down time. He used his free time at work to teach himself how to program software.

As with many people who get bit by the programming bug (<– see what I did there?), he learned a programming language because he wanted to solve a problem. He had been doing all he could to make some sort of complicated mathematical calculation in Excel, but hit his limit with that tool. So he switched to using Visual Basic. Then he had a new problem to solve, and Visual Basic wouldn’t cut it either. So he taught himself yet another programming language.

There are a lot of free resources for learning programming languages, from Code Academy to MIT’s opencourseware. At this point in time, all it takes to learn to code is having the desire and the time to do so. That’s what Mr. Stapler did. (I should note that we didn’t have any children at the time).

When he felt like earning some money on the side, he started a profile on Elance, where he could browse and bid on freelance programming work. They were small jobs, paying somewhere around $300 each, but they were a way to build a portfolio and prove his abilities to himself. He also built a portfolio on github, where other open source programmers could view and use his code.

At one point, Mr. Stapler developed software that actually did his work for him at his regular job. Somewhere around the same time, Mr. Stapler decided that maybe his current career field just wasn’t stimulating enough to hold his attention; and he got a new job — as a software developer.  Four years later, he has almost doubled his salary by changing career fields.

But this story isn’t about doubling your salary as a programmer — it’s about pulling in money on the side, which he did. It started off small, with the Elance jobs, and grew to the point where he merely networked with entrepreneurs and they offered him work. Our tax returns tell this story:

Aside from Year Five, when we tried to start a business that didn’t quite get off the ground, you’ll notice a distinctly upward trajectory. Although it started out slowly, Mr. Stapler eventually got to the point where he could use his past projects to get new projects and, even more importantly, charge more for his services. At this point, he charges around $100 an hour and only chooses projects that he would love.

It’s great to have some extra income. In Year Four, we paid off an entire student loan with his side hustle income. This year, we paid off our gawdawful credit card balance.

There is a down side to side hustling.

When you have a family, your time is no longer your own. More often than not, I fell asleep to the sound of Mr. Stapler tapping away at his keyboard late into the night. When he has a project, he claims an uninterrupted morning or two on the weekend, and I take care of the children. Many times, I take the kids to my parents’ house, so this turns into a win-win. But the home stretch of a project is the most painful — he has worked nights and weekends on a passion project for months and we are all ready for it to be over, but we all have to put our heads down and push through until the end.

These days, Mr. Stapler doesn’t have a side hustle. We have been enjoying a lot of family time together. He has been offered a few different projects, but it’s hard to give up weekend family time. Our incomes make ends meet, but it would be wonderful to pay down more student loans, save money for our next car, or even buy bedroom furniture.

In the end, I’m fairly sure he will snag another side hustle. In the meantime, we have been squeezing all the family time we can out of our weekends and evenings, storing it all up for the time when he gets back to hustling.

13 thoughts on “Creating a Side Gig to Pay Off Debt”