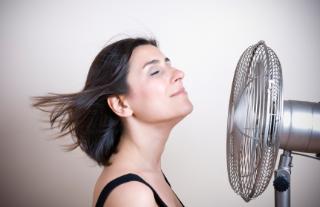 With climate change sending temperatures higher and stretching summer weather well beyond the end of the season, it’s never too late to consider whether to buy a fan or air conditioner to cool off. The decision ultimately hinges on a person’s priorities.

Of course, fans usually cost less than air conditioning — the price of the appliance runs about a digit higher, while the associated electric bills get even costlier.

However, you can find a used air conditioner for sale on Craigslist, eBay or other online site, and try to discipline yourself to use the appliance in moderation.

So far, portable air conditioners appear to use roughly the same amount of energy as the type of unit that installs in the window, only the portables by definition aren’t limited to cooling only one room.

But electricity is only one type of cost, as there’s also environmental costs: America’s air conditioners releae 117 million metric tons of carbon dioxide into the environment, according to the U.S. Department of Energy.

As severe as the costs of air conditioning may sound, for some they are a necessary evil: people with chronic illnesses can suffer health complications from hot weather.

While fans might provide relief that makes you feel cooler, they don’t actually lower the temperature like air conditioning does.

If these kinds of weather conditions happen where you live (and let’s face it, they do in more places in the U.S. than not) and you or a member of your household is elderly, a child or has a chronic illness, you just might have to grit your teeth and budget for an air conditioner.

Of course, your budget might work out best if you could hold off on using the air conditioning until the weather hit the aforementioned thresholds. This becomes more doable if you also had a fan to use for more moderate warm weather.

This might sound paradoxical at first but running the two simultaneously can save money on electric bills: A higher temperature on the air conditioner becomes more comfortable when combined with a fan (remember the fan costs 1/45 to 1/108 as much in electricity bills).

The resulting savings are very noticeable: every degree you raise your thermostat saves you around 4% of your air-conditioning energy use. If you can raise the temperature from 70 degrees to 78, you shave off almost a third of the cost to run the air conditioner.

Shut the Unit Off

Other strategies for reining in air conditioning usage include shutting it off when you leave home or limiting use to bedtime — since many people claim to have a hard time falling asleep if it’s too warm.

Additionally, if you have solar energy set up in your home, that further reduces the expense of air conditioning — although typically only homeowners are able to obtain solar power.

One exception to that is only just emerging: solar-powered air conditioning units that go in the window. Unfortunately, they cost about 10 times what a traditional window unit costs, but you’d eventually recoup that cost by not having to pay for electricity to power the unit.

In the meantime, deciding whether to purchase a fan, air conditioner or both should balance budget concerns with an honest assessment of one’s physical and mental health under high temperatures.

Since even locales with moderate climates have become more prone to extremes, residences that lack air conditioning might feel unbearable in the summer, even with all the windows open and fans running.

But that might be doable if you’re young and healthy — especially if you go to the movies or public library for air conditioning on the hottest days of all.

Meanwhile, you can learn more about how to save money on cooling your home in the infographic below from the U.S. Department of Energy.

2 thoughts on “Which Is Cooler, a Fan or Air Conditioner?”