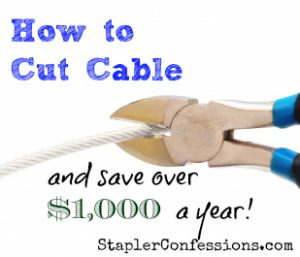 I know you hate paying your cable bill.

Maybe you’ve put it on autopay so you don’t have to think about it, or maybe you grudgingly set up your online bill pay each month. Either way, you’re not alone. As resources like this Infinity Dish article suggest, more and more people are “cutting the cord” … on cable.

This new wave of cord cutters is particularly ironic for my parents, who were probably the last people in their town to start subscribing to cable a few years ago. Now, if they want to watch shows like House of Cards or Grace and Frankie they have to learn a whole other world of how to stream online content.

The options can be daunting. I know, because people ask me about it on a weekly basis. When they find out we don’t have cable, they ask how we do it and whether we like Netflix or Hulu Plus or Amazon or have an Apple TV box or how do we watch football?

The questions come fast and furious.

First, I have to admit that we don’t watch sports in our house. It’s just not something that interests us.

Second, I have to admit that one of the main reasons I like streaming online content is because I hate watching commercials. I’m particularly grateful for my aversion to commercials when it comes to Little Stapler’s TV-watching. It helps our frugal lifestyle when he isn’t bombarded by commercials while watching his favorite shows.

Third, we “only” saved about $40 a month when we cut cable, because we have one TV and subscribed to standard definition basic cable. And I mean basic: We did not have Bravo or MTV. The average cable customer pays $135 a month for bundled internet, phone, and cable. Make some cuts, and households can spend as little as $35 per month — a savings of $100 a month, or $1,200 per year. Add in a few streaming services like Netflix and Amazon for $8 a month and you’re still sitting pretty with a hefty discount. 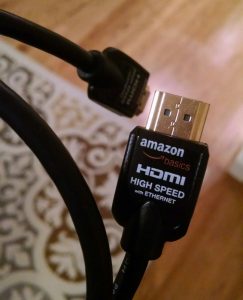 Depending on your television-watching interests, you don’t even need to add streaming services. Some of my favorite programming is available free and I sometimes buy episodes of my favorite shows anyway. I’ll tell you how.

How We Cut Cable

Please note that some of these links are affiliate links

Step 1: Connect to the Internet

Navigate to online content with your Smart TV: We have a smart TV, but I still connect with HDMI (read below) because I haven’t even tried out the Smart TV function yet.

Connect with HDMI: For programming available online for free, such as Downton Abbey (on PBS.org) or Project Runway (on MyLifetime.com), I connect my laptop to my television with an HDMI cable. On my laptop, I navigate to the episode I want and when I plug in the HDMI cable, a copy of my desktop screen appears on the TV. 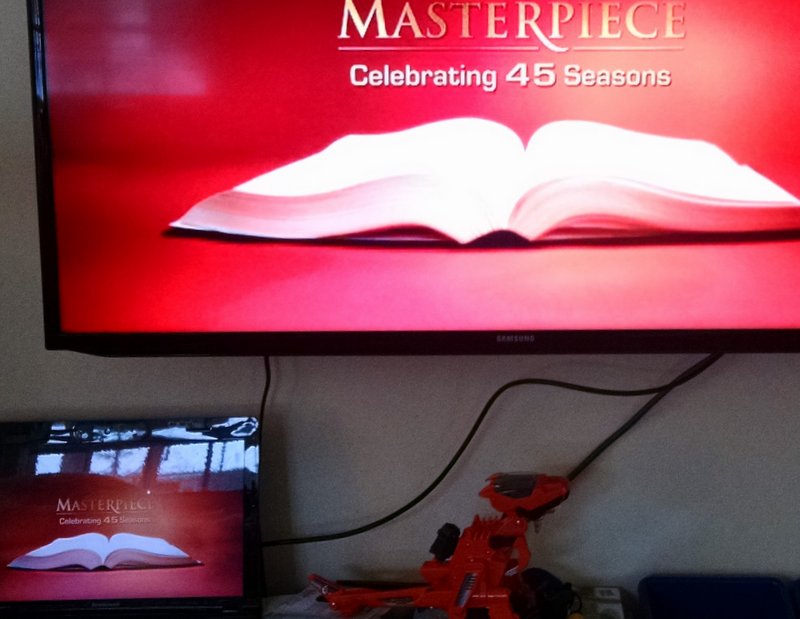 Here is my cord-cutting setup when I stream online content. The HDMI cable is the cable between the dinosaur and the TV. (dinosaur optional)

You may have to mess with your “display” settings a bit to make sure it copies your desktop to the screen, but for many computers that is the default setting when connecting an external monitor.

You can buy an HDMI cable from amazon for less than $6.

Use a Streaming Device: We use our PlayStation 3 to stream programming through internet-based apps. Any “Smart TV” will allow you to stream directly to your television without needing a separate device. You’ll be able to download and use all of the streaming apps directly onto your television. Other streaming devices include:

Step 2: Use a streaming app or the Internet

Once you have a streaming device, you can choose from a few different streaming apps, including pay-per-view services and subscription services. Here are the most popular options, all of which offer a free month-long trial period.

This is an essential service when you have kids! Netflix has an extensive, commercial-free, collection of programming for children. Moreover, my son has been able to navigate to his favorite shows on his own since he was about four years old. Netflix offers a kid-friendly interface that makes it easy.

Netflix streaming has a lot to offer adults too. Mr. Stapler loves science documentaries — space, dinosaurs, animals, you name it. I enjoy the Netflix originals House of Cards and Orange is the New Black, and have watched many television shows through to the latest season, although I can’t watch it while the season is airing. Netflix offers shows from Breaking Bad to Scandal, from Battlestar Galactica to Sherlock.

Amazon Prime: $8.25 per month subscription, payed in one annual installment of $99. Plus, a pay per episode option within the Amazon Video streaming app.

I like the selection of programming on Amazon Prime, particularly the Masterpiece programs not on Netflix (Endeavour, Broadchurch, The Worriker Trilogy) and the Amazon original Mozart in the Jungle, which is the best TV series I have seen in a long time.

I also like the option of buying episodes of shows that are too new to be offered free with Prime or on Netflix. Another bonus is the ability to add on premium channels like Starz or Showtime. I’m considering adding Starz so I can watch current episodes of Outlander, although at $8.99 per month it doesn’t seem worth the cost when I could otherwise just buy the episodes — unless I could stream an entire season through the month. Then it’s worth it!

That said, I have a few problems with Amazon’s user interface. Nothing that’s a dealbreaker, but if a show is offered on both Amazon and Netflix, I will always choose Netflix. Plus, you currently can’t stream through Apple TV or Chromecast (you can’t even buy these devices on Amazon).

We subscribed to Hulu Plus for a few months because I wanted to watch current television. Even with a subscription, however, Top Chef still wasn’t available. That was disappointing, but I was able to watch current seasons of my other favorite TV shows. Being forced to watch ads was a dealbreaker, however, and we cut the cord. The ads were the same annoying ones — sometimes up to 5 times in one episode.

No one else in my family watches current television programming, so we saw no need to continue our Hulu Plus subscription. They are taking a cue from Amazon and Netflix, however, and adding original programming like The Mindy Project. Unfortunately, you probably won’t find CBS or Bravo shows on Hulu Plus.

For those shows and movies not available from your monthly subscription, you have the option to purchase the movie or episode and stream directly from Amazon, Apple TV, or Redbox; or buy on iTunes or GooglePlay and connect your computer or tablet with HDMI. Myself, I love Game of Thrones, which I wouldn’t be able to watch with my basic cable package anyway. So, even when we had cable, I purchased episodes and streamed to my television from iTunes or watched directly through Amazon.

Money-Saving Tip: Buy episodes with credits you get on Amazon when you choose “Free No-Rush Shipping” (more info here). This is a great way to get Amazon Prime to practically pay for itself.

Are you ready? Ready to try out some of these services and see if you can take the plunge into the world of the cable-cutters?