Did you miss my monthly financial updates? I was too embarrassed about our credit card debt to post one last month. Now that I’ve come clean about it, and we received The Check, I’m breathing a sigh of relief over most of that mess.

I would like to say that we’re putting it all behind us, but I realized that, particularly until Little Stapler goes to kindergarten, we will have to watch our spending like hawks. To that end, we are using the cash envelope system for managing our spending. It forces us to prospectively look at our monthly income and tailor our spending to that month’s income.

How’s it going? Within the first day of using the envelope system, I felt the pinch. I had a list of toiletries and household supplies I had to get, and only $30 to do it. With such a tight budget, it was actually easy to say “no” to anything not on my list. When it comes down to spending money on facial cleanser or self-tanner, cleanliness wins over vanity.

Using cash for our budgeting instantly separates the wheat from the chaff. I’m not going to waste my money on something I might use; something I didn’t think about until I saw it in the store.

In other news, I started a new job. I am so relieved to have a regular salary instead of trying to puzzle together an income each week. I’m also thrilled to have a 401(k) again, with a 3% match! Opting for a 3% match is a no-brainer for me, but I’m happy to go through the pro’s and con’s in a later post if you’re interested. 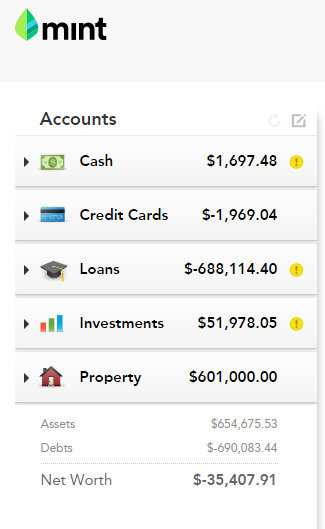 Credit Cards: – $14,358.57. The Check wipes away the credit card debt, but for some reason Mint.com hasn’t been able to update the balances. I was really looking forward to grabbing a screenshot of $0 on our credit cards. Maybe next month?

Regardless, this is probably the lowest balance we have had on our credit cards in a decade.

Loans: -$2992.13. As a new homeowner, I have been enjoying seeing our mortgage go down so much more quickly than our student loan debt. I don’t believe that renting is “throwing your money away,” because there are plenty of homeownership expenses that aren’t recouped (taxes, insurance, and interest to name a few), but the mortgage payments are increasing our net worth by over $10,000 a year (as long as our home value stays stable).