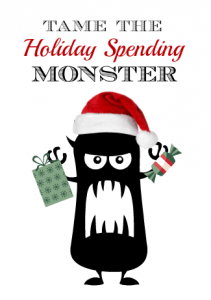 Now that it’s November, it’s time to come to grips with the fact that the holidays are just around the corner. If you are under a mountain of debt, or a mountain of toys that your child doesn’t play with, you might be considering “cutting back.”  As you know, since cutting back on our gift spending, we were a lot happier as a family. You might find yourself in the same situation, but don’t take my word for it …

I met Jackie recently at a conference and was so impressed with their debt payoff journey and frugal living experience. I found that we had a lot in common. Her and her husband paid off over $147,000 in debt (including their house) to become completely debt free. Along the way, she created the Pay Off Debt app to help others do the same. You can read more about her story and the app at TheDebtMyth.com. Here is her perspective on the holiday gift-giving conundrum.

I used to buy gifts and then hope I’d magically get enough cash together to pay for them by the time the credit card bill came due. In order to get out of debt, that had to change. (Along with some other things.)

So how did we bring our holiday spending under control while we were getting out of debt?

The first step was cutting up the credit cards. (It’s hard to charge gifts you can’t afford when you don’t have credit cards. I highly recommend cutting them up.)

Next up, of course, was planning ahead.

Preparing instead of hoping

The holidays come around every year like clockwork, so it’s silly to pretend that they don’t.

To stop the holidays from sneaking up on us, I made a master list of the people I buy for and began keeping an eye out for gifts all year long. We typically bought for 24 people (not including little things for acquaintances and coworkers), so I tried to buy a couple of gifts each month beginning in January. When I bought something, I made a note of who it was for, what it was, and where I put it. (There’s nothing worse than finding a great gift and then forgetting where you stored it.) Spreading out the shopping throughout the year helped both money- and stress-wise.

Still, buying that many gifts — let alone trying to make them gifts that someone actually wanted — was tough on the wallet and heavy on the stress. Our budget was limited, so sometimes we felt guilty or inadequate if we gave a small gift and got something much nicer in return. And we were still worried about how to stretch our funds — often to buy gifts that people we didn’t know that well probably didn’t even want. (Does anyone really need another coffee mug from a coworker?)

Jumping off the commercial bandwagon

So one year, we got off the commercial bandwagon. We reduced our gift list to a grand total of 6 or 7 and focused on showing the people we love that we care in other ways — ways that take place throughout the year.

That meant that not every gift we did give had to cost money. Sometimes, time is the greatest gift you can give. If you’re a parent, you know how much it means when your child wants to spend time with you or makes something for you. That doesn’t change when you’re an adult. After my grandpa died, my grandma told me that one of his favorite gifts ever was a little jar I’d filled with 90 strips of paper. (Each paper described a memory or something I loved about him.)

So getting creative and focusing on meaningful works too. Not only did we have more money to put toward our debts, by cutting back on our gift-giving (and receiving) we found more joy. Now that we are out of debt, we don’t stress out about holiday spending, but we still keep the gift giving reined in. That’s because it’s just plain nicer without it. But we’d have never discovered that if we hadn’t cut back out of necessity.

How would you feel about cutting back?

Sad because gifts are very meaningful to you? (They mean a lot to me too, so I was surprised to find that cutting back actually made me feel better.)

Relieved? Frustrated because you know your circle would never agree?

Those are probably common reactions, especially that last one. I’ve heard things like “We always talk about drawing names, but every year there’s someone who doesn’t want to do it. It’s so annoying.”

But you know what? Everyone doesn’t have to do it, let alone want to do it. (And you don’t have to draw names to cut back.)

If you want to switch to a low-gift holiday, you just do it. You are in control of you. Let the people you typically exchange with know now that you’re either not going to be giving gifts or you plan to cut back, and that’s it. Then do so. (Or let them know right after the holidays for next year, if that feels better to you.)

It’s up to others if they want to do the same or not. Their choice is still theirs. When we let people know we didn’t plan on exchanging gifts any longer, we got reactions that ranged from “Great idea! I’m going to do the same!” to “Eh…ok, but I’m not going to change”. And that’s all great. The people we did keep on our list were either people that I knew absolutely loved giving and receiving gifts, or people that I just couldn’t bear not to give to.

Remember, it IS perfectly fine to get gifts from people that you didn’t give to. You don’t have to whip out an emergency gift to feel even. (Coworkers will probably take you off their list for next year and move on.) Sometimes people just love to give gifts, and all they really want is the pleasure of seeing your reaction or knowing that you appreciate their thoughtfulness. They don’t want you to stress out, so don’t. Sincerely thank them instead, spend time with them, and joyfully share the holidays together.

After all, isn’t that what the holidays are really all about?