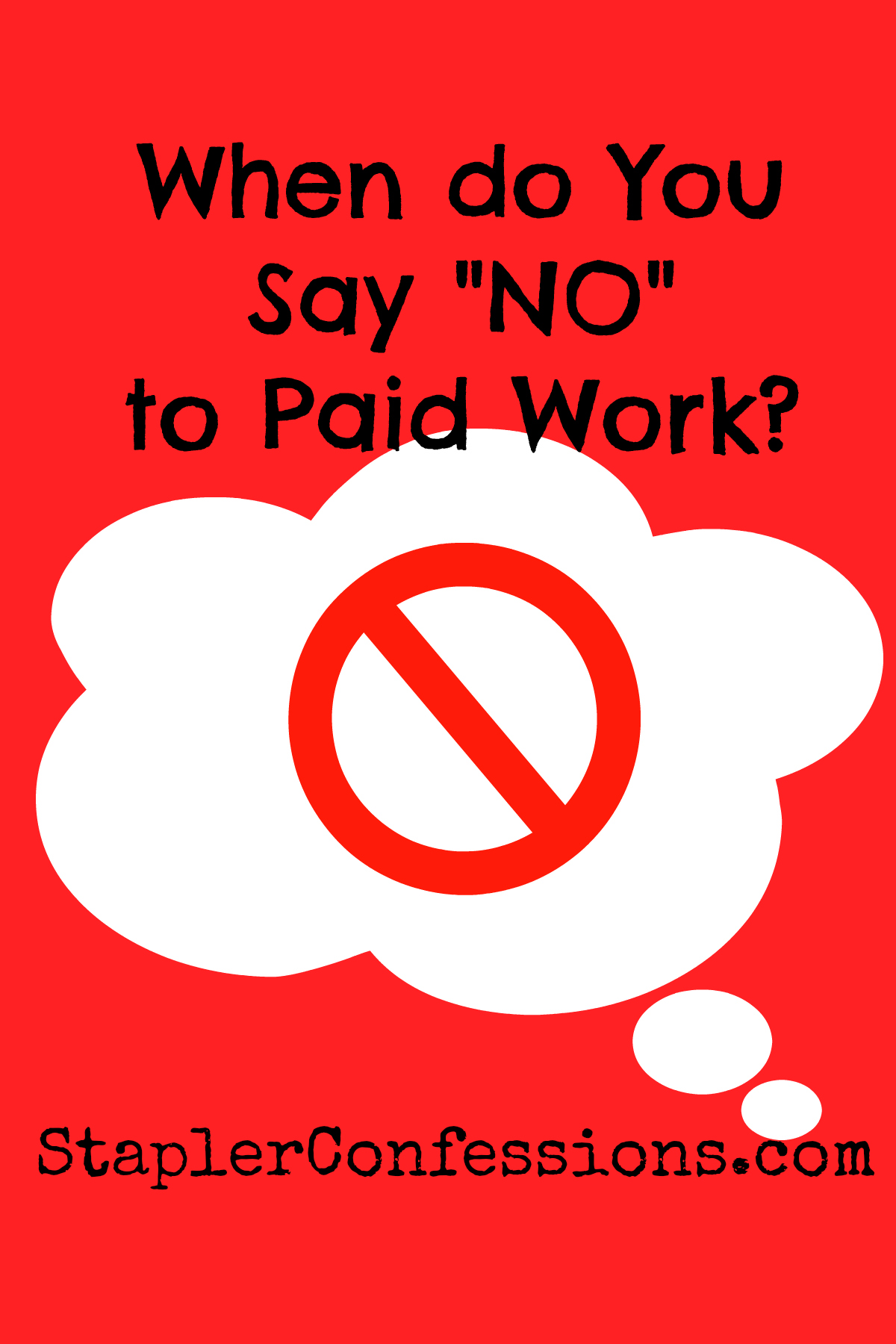 As a mom, I say “no” all the time to my preschooler, so that little two-letter word is not unfamiliar to me. “No, you can’t jump over the couch;” “No, you can’t stay up later;” “No, you can’t cross the street by yourself.” But when it comes to my personal health and well-being, I have a hard time saying “no.”

Throughout this pregnancy, I’ve known enough to say “no” to everything during my baby’s first year. I remember only little snippets of Little Stapler’s first year, and it’s always blurred by the fog of stress and sleep deprivation. I remember enough to know that joining a committee at church, taking a class, or adding anything to my weekly “to do” list is a losing proposition. And, although I remembered enough about the third trimester to make sure I got my holiday shopping done in advance, I forgot about all the stress I felt at work during this time the first time around. Now it’s catching up with me and I finally realized that I have to start saying “no” before Baby arrives, too.

I thought that I would work my full schedule up until my water broke, but the daily stress of being a litigator is truly catching up to me. I’m not sure if it’s my workload, the nature of litigation (where one day I could be on top of my workload but the next day be hit with 3 deadlines in the next 2 weeks), or the hormones talking. But something is screaming. A lot of the time, I’m snapping or complaining — and I don’t like to be that way. And sometimes I’m crying. I think crying at the drop of a hat is pretty normal pregnant lady behavior, but it would be great if I didn’t do it at work.

The problem with saying “no” to paid work is that I can see a light at the end of the tunnel. Now that I’m back to rolling our debt snowball, I’m projecting income and expenses six months out. My spreadsheet is telling me that, if I work at the same pace for the next six weeks, we will be able to pay off another student loan by the end of the year. “Merry Christmas!” I said to Mr. Stapler when I broke the good news. Then I told him I wasn’t sure I could keep up my current pace, which would bum me out because we wouldn’t be able to pay off the loan. You know what he said? “I’d rather have given Little Stapler music lessons at $80 than pay off that loan.”

Am I really in this alone? Does he really not see that paying off the loan before 2015 means that we will have $95 a month extra in 2015?! That can more than pay for this music class he wants. (Note: “he” refers to Mr. Stapler, not Little Stapler — I’m still not sure who wants this more!)

But I’ve digressed. (See what I mean about the complaining?)

As much as I like my job in general and as happy as I am with my life in general, the day to day has gotten more and more difficult both physically and emotionally. My job has turned into a source of anxiety and my life has turned into a series of “just trying to get through the day.” It’s time to find a better balance, but I’m having a hard time saying “no” to paid work.

My boss is out for the next few days, but when he gets back I hope I can ease up on some of my workload. He will be covering for me during maternity leave, so he’s probably going to have to learn to say “no” too. It might be best for both of us if he takes some of my cases now, but it stings to turn down paying work. I’ll have to ratchet down my loan payoff expectations. Again!

4 thoughts on “When Do you Start Saying “No” to Paid Work?”